Shaheer Sheikh and Ruchikaa Kapoor have tied the knot with court marriage on 27th November 2020. They have been dating for years. Shaheer is the television heartthrob. Ruchikaa is a Creative Producer & Executive Vice President at Ekta Kapoor’s Balaji Motion Pictures Ltd. Ruchikaa has also worked with Kareena Kapoor Khan, Sonam Kapoor in Veere Di Wedding and Laila Majnu as the creative producer. Shaheer Sheikh also wins many hearts with his killer smile and beautiful acting skill in Mahabharat and eh Rishtey Hain Pyaar Ke. His fans became happy getting his engagement news with Ruchikaa a few days ago. The duo is seen spending their quality time together. Let’s check out the photos of this love-bird…

In a interview Shaheer told about her Lady Love Ruchikaa Kapoor

Ruchikaa is honest when it comes to her feelings. The best part about our relationship is that we are friends first. Being an actor, I have to pretend in front of the camera all the time, but I have found a partner with whom I get to be myself. I’ve always said that I’m a wanderer and I’ve finally found the right companion. I am looking forward to my never-ending travels with her.

Ruchikaa also told in a interview

It is Shaheer’s simplicity and humility that drew me towards him. It’s rare to find someone who keeps it real and believes in the goodness of people. We come from different backgrounds, but instead of focusing on our differences, we chose to celebrate them. We may make little sense to the world, but we make a lot of sense to each other 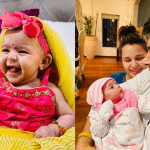